head6_preview
Toby, Leo and Lucas are all interviewing for a new career.  Geoffrey has been conducting this extraordinary interview process and now takes it a very competitive level.   This next level is to test Group Dynamics, such as Leadership, Guidance, Flexibility and Team Work.  Our interviewers test the guys in the abilities to suck cock.  Are they capable of taking guidance on how to suck a huge cock, are they flexible enough to swallow it all, do they take the lead in the group and do they work together on sucking huge cocks?  Lucas moves into position to showcase all of his skills at once.   Leo thrusts his dripping cock deep into Lucas’ ass while Toby fucks his hungry mouth.   Joe steps in and begins to eat Leo’ hot ass before he begins punch fucking Lucas with his steel rod.  Geoffrey also moves into position and fucks Lucas’ mouth while sucking away at Leo’s throbbing cock.   Geoffrey and Joe switch it up and Joe pounds his wet cock into Leo’s hungry hole while Geoffrey fucks away at Lucas’ dripping wet hole.  Toby steps up and forces his cock into Lucas’ hot mouth.  Toby, Lucas and Leo then stand over their interviewers and begin ripping off their pent up ejaculations onto their awaiting interviewers.  Toby is the first to shoot his creamy load all over Joe, quickly followed by Lucas with his mushroom head swelled to full capacity as he unleashes his milky load then Leo slams his load out and onto Joe as well.   Geoffrey’s balls are drawn up so tight and ready to explode his huge load as Joe looks on with his head and body dripping in cum he erupts a geyser that shoots straight into the air that would make any employer proud.  Geoffrey is left with a difficult decision, all the candidates have proven themselves worthy, but which one stands out amongst the three?  Could this possibly lead to another interview level?

Posted by Unknown at 3:17 PM 2 comments: Links to this post

Posted by Unknown at 3:16 PM No comments: Links to this post

Email ThisBlogThis!Share to TwitterShare to FacebookShare to Pinterest
Labels: Hairy 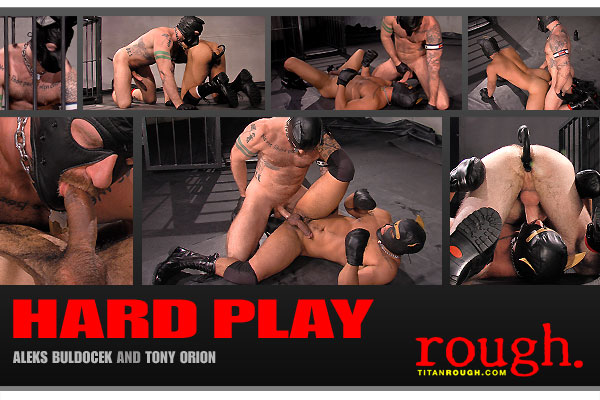 Crouched in a cage, puppy Tony Orion gets led out by alpha dog Aleks Buldocek—their two faces covered by dog masks as tails wag out of their asses. With his huge bone, Aleks takes control—the two rumbling around, sniffing each other’s holes as they bark. After burying his leather snout in Tony’s butt, Aleks frees his bud’s mouth—which is soon wrapped around the alpha’s massive meat. Tony’s chain collar rattles as he sucks, the sub soon getting sniffed and fucked from behind. The bottom whimpers as he gets it deep, Aleks’ tail bouncing around as he plows the pup. Tony’s dick is stiff as he gets fucked on all fours, a strand of glistening precum dripping from its head to the floor. Tony’s ass ripples, the two soon rolling around as they 69—then butting heads as Aleks’ ass wags. The alpha gets Tony on his back, an overhead shot capturing the deep penetration beautifully as they bark. The two squirt, Aleks’ load coating Tony’s crotch

Posted by Unknown at 2:27 PM 5 comments: Links to this post

Long time fuck buddies Troy and CanaDad know just what the other likes and is always ready to provide. This time Troy is in bed working himself up when CanaDad comes over for play time. These guys are a pair of real men, and CanaDad is eager to work Troy's hole with his tongue and swallow his thick shaft. Troy loves the way CanaDad's thick lumberjack beard brushes his balls when he's getting rimmed out and he's eager to taste the big, burly daddy's asshole as well. These pair of horny freaks flip fuck, pounding each other furiously until they're drenched with sweat and CanaDad drops a huge load that will make YOU weak in the knees! Click here to see more
Posted by Unknown at 12:00 AM 1 comment: Links to this post

Promote Your Page Too